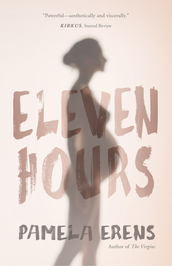 Destiny would have it that when two people meet, especially when they are of disparate personalities and cultures as Lore and Franckline, the main characters created by Pamela Erens for her third novel, Eleven Hours, they have something to learn from each other. Perhaps there’s a need, a bit of karma they have to work out between themselves. Lore, a young white teacher, arrives alone at the maternity ward of a New York City hospital with a birth plan so dense it may as well be a legal brief. Franckline, a Haitian immigrant in the early stages of her own unannounced pregnancy, is the nurse overseeing Lore’s labor. She recognizes right away the thorny patient may have something to teach her.

“This girl in room 7, so solitary, so wary, seems a sort of warning. Franckline should not become like that, a person too shut up in herself, too frightened and proud to share her pain. There is a side of her, she knows, that gravitates in that direction, toward that pride, that aloneness.”

Lore’s pride is actually more the response of an injured person. Betrayed by the father of her baby, she seems to chide herself for all the signs she missed. Her birth plan could even be a “not again” notion on her part—she attempts to wrangle control once more by foreseeing, she thinks, every possibility and accounting for every detail of the birth. But Franckline seems to be there to let Lore know life will happen anyway, despite such careful planning.

A bond develops between the two women and its formation is the core story of Eleven Hours. It’s a swift read, just 175 pages, but nothing about the book feels rushed, including the well-observed progression of Lore’s labor. In all the right moments Erens astutely relates how the insistent pain of childbirth can make minutes feel like hours and a short walk down a hallway seem like an expedition across the Sahara. She takes risks to maintain a sense of immediacy: point of view shifts going back and forth between Lore and Franckline happen without warning and can be disconcerting in the early pages. So often workshop instructors warn writers against muddying the point of view waters. But having read the author’s first two books, The Understory (2007) and The Virgins (2013), I know she can tell a great story in unconventional ways. In other words, good writers can bend the rules. And Erens is an excellent writer.

Eventually I came to see what Erens was doing as all of a piece—the two women as one voice communicating all the various experiences of womanhood: love, loss, fear, jealousy, hope, anxiety, just to name a few. Lore and Franckline are not as different as it seems and neither are we as readers. This provides another level of immediacy, opening the doorway to our own connection with the book as we see ourselves within and making the eleven hours experienced in the novel time well spent.