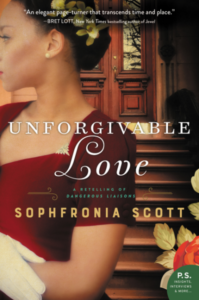 In this vivid reimagining of the French classic Les Liaisons Dangereuses, it’s the summer when Jackie Robinson breaks Major League Baseball’s color barrier and a sweltering heat has Harlem’s elite fleeing the city for breezier Westchester County. But two schemers there prowl amid the manicured gardens and fine old homes.

In Harlem 1947, Jazz may be king, but heiress Mae Malveaux rules society with an angel’s smile and a heart of stone. She made up her mind long ago that nobody would decide her fate. Marriage, money, freedom… Mae wants complete control. To have the pleasure she craves, control is paramount, especially control of the men Mae attracts like moths to a flame.

Valiant Jackson is accustomed to getting what he wants—and he’s wanted Miss Malveaux for years. The door finally opens for him when Mae is slighted by her former lover Frank Washington, and she strikes a bargain: seduce her virginal young cousin, Cecily, who is now engaged to Frank, a man who values Cecily’s innocence above all else. If Val is successful, his reward will be Mae.

Unbeknownst to Mae, Val seeks another, even more valuable prize. Elizabeth Townsend is fiercely loyal to her church and her civil rights attorney husband. She is certain that there is something redeemable in Mr. Jackson. Little does she know her most unforgivable mistake will be Val’s greatest triumph. But for all their scheming, Mae and Val are unprepared for what can happen between a man and a woman when the thrill of the chase spirals wildly out of control.